“The Serendipity of Alcohol Inks” by Guest Blogger – Linda Chadwick-Wirth

One of the great thing about alcohol inks is that they seem to have a will of their own, often leading you to a painting that is far different from what you had in mind when you started. The very nature of the inks allows an osmosis of intent and what was a seeming failure will continue on to become a success of an entirely different flavour.

I recently had just such a journey with my inks where a picture intended to be an abstract ended up as an intensely realistic red-tail hawk. I happened to capture the stages (for once), taking pictures occasionally, and it ended up being a photographic story of how I work, so Sheryl asked me to share it here.

Both Sheryl and I tend to prefer painting “things with an eye,” but, as with all artists, our individual painting approaches differ somewhat. While Sheryl’s work often leads from the subject out; mine tends to start with the background and then the subject 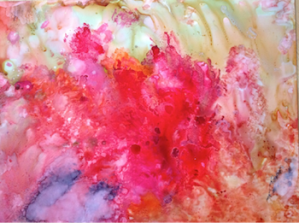 emerges. Usually, this is planned, with me having a subject photo in mind first, which guides my color selection and to some extent the color placement on the page. I don’t generally mask the area where the subject is to be. The background abstract colors are in place first and I use a combination of painting and lifting to bring the subject to life from the background.

This is how I painted my flamingo pictures. 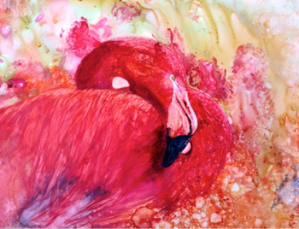 The hawk, however, was totally unplanned. Ihad recently received a copy of Pigments of my Imagination by Cathy Taylor and was playing with the credit card pattern shown in the book. I used the Ranger “Rustic Lodge” set: Bottle, Rust, and Denim in my unsuccessful attempt at replicating the Terra look. 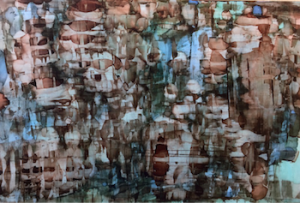 Drats – this just isn’t interesting enough to be my “abstract” for the alcohol painting group’s last week challenge. But as the subject for the current week is “birds of prey” maybe this background could be used for that, instead. 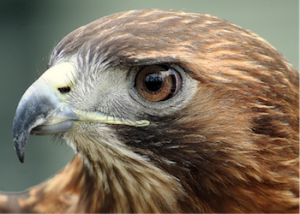 I set about looking for a reference photo. When painting animals, like Sheryl, I look for interesting light effects and a focus on the eye(s). It didn’t take long to find a picture that combines both.

Using white transfer paper, I trace from photo onto my background. After tracing, I like to first lift the general outline with a Chameleon blender pen, then start work on the primary focal are 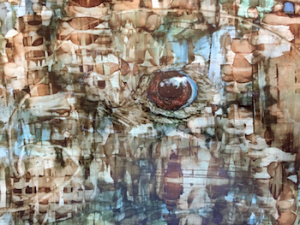 a – usually the eye. I almost always use Spectrum Noir or Bic pens doing eyes. (I have a set of 30 something fine point Bic markers, which are alcohol ink based – they have a finer nib than the Spectrum Noirs and still allow the same blending and smudging.) Eye highlights, like the dramatic one in this picture, are simply a matter of removing ink. 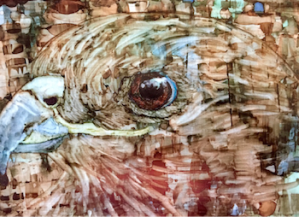 Then I follow with my secondary focal point; in this case, it is the beak. Here, again, I use a combination of pens, smudging and blending with the Chameleon blending pen. 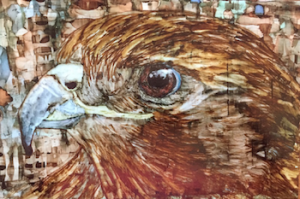 Lifting with the Chameleon blender starts defining feathers. Then depth is added to the color with Teakwood ink, using a fan brush to add more feathering. And now, there is a decision point – to leave the background, which I like, or remove it? 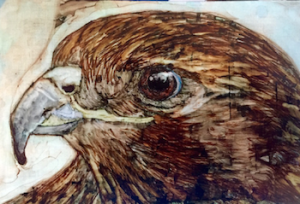 Usually, I leave the background and use some “inky techniques”: cotton ball swabbing, misting, etc. to create an illusion of the subject emerging from the background. In this case, however, the background pattern is too busy and the focus on the hawk is lost, so I remove the background, swiping it off with alcohol-soaked cotton balls and cleaning up around the hawk itself with the blender pen, leaving the ink-stained paper. 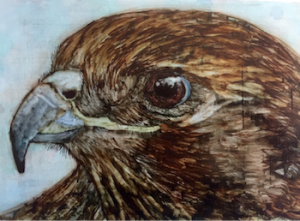 After cleaning up the rest of the background, the final touches to the bird are added – more definition to the feathers with the Chameleon pen and the fan brush with Teakwood; placing the “whisker-feathers” on the face with a dark grey LePen and then using it throughout the feathering and around the eye to accentuate patterns found in the photo. There are some original vertical pattern lines left in the bird, which now seem a bit out of place, but for the time being, I leave them.

From an abstract to a bird of prey… just one of the fun trips the inks have taken me on!

This site uses Akismet to reduce spam. Learn how your comment data is processed.